“Is a ‘brain massage’ the secret to treating depression?”

The feature includes an interview with Smart TMS Medical Director and Consultant Psychiatrist, Dr Neal, as well as Freddie Webster, a former patient and great advocate of TMS.

“Can a ‘brain massage’ battle the potentially life-threatening effects of depression?

“That’s the hope behind a relatively new treatment, called Transcranial Magnetic Stimulation (TMS for short), which is showing impressive results in the treatment of depression among test cases in the UK.

TMS sends magnetic pulses of low-level electric current through specific parts of the brain, stimulating or suppressing the cells and potentially – so the theory goes – changing their behaviour. It’s been around for a while, but has only recently been fine-tuned; the National Institute for Clinical Excellence backed TMS in 2015, recognising it as a safe and effective treatment for a range of disorders including neuropathic pain, depersonalisation syndrome, depression and addiction.”

The Daily Telegraph interviewed Smart TMS patient Freddie Webster to better understand how the treatment works and how effective it can be. Freddie explained:

“I’ve battled depression for the past 10 years, combating it with drugs in the darkest moments when my thoughts turned to suicide.

“When I was first diagnosed with a depressive disorder the symptoms would begin with me feeling down about everything, having a bleak outlook, lacking energy but having heightened anxiety. Then I would descend into bouts of clinical depression. I’d lose focus, I couldn’t concentrate, my memory would suffer, it ruined relationships and jobs. I’d have suicidal thoughts.

“When you have more than two episodes like that you’re suffering with a major depressive disorder.”

Freddie’s battle with depression included a string of antidepressants, as well as trying lifestyle changes including strenuous exercise, moving jobs and taking breaks. However, theses did not resolve the problem, as Freddie explains:

“At my lowest point, I could barely form sentences or think straight. My memory wouldn’t function and I felt like my mind was shutting down.”

After referral to a mental health recovery service and a prescription for Diazepam, Freddie continued to research his condition and other options. He heard about TMS when American comedian and depression sufferer, Neil Brennan, described in a podcast how he had found it life-changing. Freddie says:

“He was talking about his personal battle with depression and described how what he called ‘magnetic brain therapy’ had cured him.”

The treatment is not widely available in the UK, but Freddie found the Smart TMS clinic in London and after full assessment commenced treatment.

“Freddie’s depression score was one of the highest we’d ever seen.”

The Daily Telegraph describes the change that TMS has made in Freddie’s life: 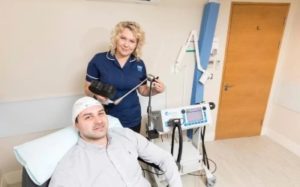 “After having 20 sessions of 40-minute magnetic pulse treatments over five weeks in January and February of this year, Freddie Webster is a convert.

“I feel the best I have since before I started to suffer with depression when I was 16. In the space of five weeks, my symptoms completely reversed.  The mental pain I had has disappeared and my suicidal thoughts have gone.

“For the first time in 10 years, I’m excited about the future and it’s all because of TMS.””

Read the full story on the Daily Telegraph website:

Smart TMS offer treatment for depression with Repetitive Transcranial Magnetic Stimulation therapy (rTMS) in their London based clinic and have plans to open further TMS Treatment Centres in the UK during 2017.

Smart TMS is a specialist provider of TMS treatment in London. Repetitive Transcranial Magnetic Stimulation therapy (rTMS) is a technological breakthrough in the treatment of depression with a variety of further potential treatment applications. It is a non-invasive treatment for depression which uses magnetic impulses to work on areas of the brain affected by depression and has the approval of NICE.