Transcranial Magnetic Stimulation (TMS) is an innovative approach to breaking the habit of smoking by tackling nicotine addiction.

This is a new approach to the condition which uses non-invasive magnetic pulses to modulate the areas of the brain affected by addiction, helping you to live a healthier life. 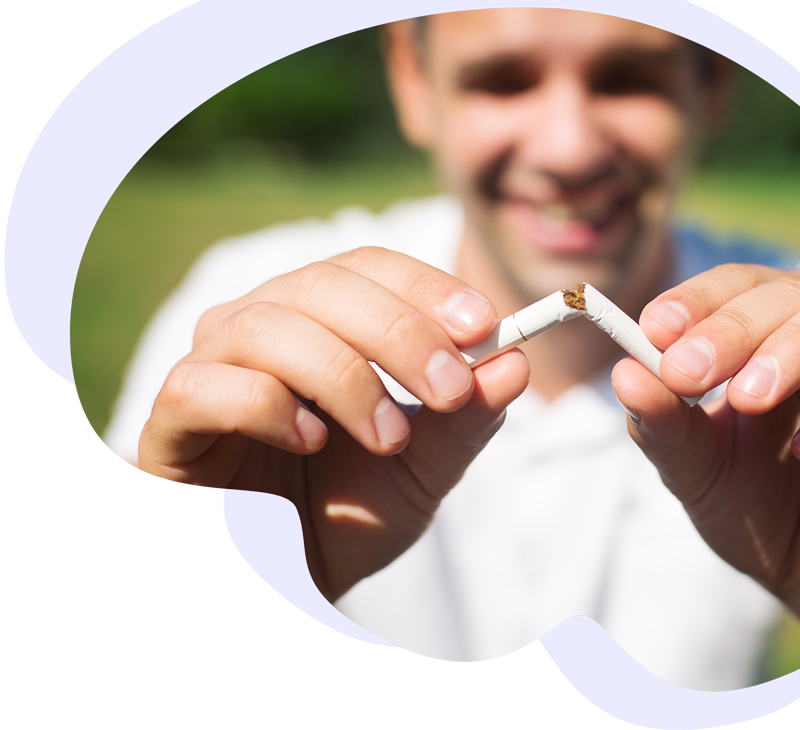 Smoking is one of the biggest causes of death and illness in the UK.

TMS treatment can stop you craving cigarettes, letting you feel fitter and reducing your risk of developing smoking related illnesses.

Transcranial Magnetic Stimulation (TMS) is an innovative approach to treating smoking addiction. It’s a non-invasive therapy that uses magnetic pulses to calm the areas of your brain that cause cravings, helping you to stop reaching for your cigarettes.

Around 7.4 million people in the UK smoke. Most people know when they are addicted to smoking, but not everyone can identify the signs of their addiction because they become a standard part of day to day life.

Signs of being addicted to smoking may include:

• Spending time thinking about smoking when you’re unable to have a cigarette
• Needing a cigarette as soon as you wake up
• Being unable to resist the urge to smoke
• Suffering from withdrawal symptoms, such as irritability, increased appetite and anxiety

The NHS has several recommendations to help you stop smoking. These include nicotine replacement therapy (NRT), which can include nicotine patches, gum and sprays. NRT provides small amounts of nicotine to help reduce cravings and other withdrawal symptoms. Side effects of these treatments can include: vivid dreams, headaches, dizziness, skin irritation and an upset stomach.

Champix (Varenicline) tablets, which are only available on prescription, make smoking less enjoyable and help to reduce the withdrawal symptoms. The medication isn't safe when pregnant or breastfeeding, nor if you suffer from kidney problems. It can cause nausea, vomiting, insomnia and dizziness, amongst several other symptoms.

Buproprion (Zyban) can also be prescribed to help reduce cravings. This, too, is not safe during pregnancy or breastfeeding and also isn't suitable for those living with epilepsy, bipolar or eating disorders. The side effects are very similar to Champix.

Other methods can include using e-cigarettes and exercise to distract yourself from your cravings.

Every year, addiction prevents millions of people from quitting smoking.

Research has shown that Transcranial Magnetic Stimulation can be an effective way to tackle an addiction to nicotine and help you stop smoking.

The Royal College of Physicians states that, “…nicotine delivered through tobacco smoke should be regarded as an addictive drug,” and “…cigarettes are highly efficient nicotine delivery devices and are as addictive as drugs such as heroin or cocaine”.

It’s no wonder that many methods of quitting – from nicotine patches to hypnotherapy – can prove unsuccessful.

How does TMS treatment work to stop smoking?

Transcranial Magnetic Stimulation works by targeting the areas of the brain that control addiction.

With no anaesthetic, no medication, no need for hospitalisation and no recovery time, this non-invasive treatment uses a repetitive magnetic pulse to stimulate the parts of the brain that cause alcohol cravings and dependence.

When helping you quit smoking with TMS, 15 sessions of treatment will be prescribed. These will be booked daily for three weeks (Monday to Friday).

Research has shown that Transcranial Magnetic Stimulation (TMS) can reduce the cravings of nicotine addiction.

Overcoming addiction is no easy task, especially when temptation is everywhere. Whether you’re used to having a cigarette after your breakfast or last thing at night, our aftercare packages are designed to help you stay stay away from cigarettes, despite the temptations you’ll face.

Patients who are able to quit smoking with Smart TMS can benefit from the following aftercare treatment:

Quitting smoking is possible, and Smart TMS can help.

The good news is that most people are suitable to receive TMS treatment.

To help you learn more about treatment, we can arrange a clinic visits so that you can see the TMS machine, meet one of our practitioners and ask any questions you have to help you decide.