A Smart TMS patient who beat 10 years of depression with repetitive Transcranial Magnetic Stimulation treatment in London has been featured in the press.

Freddie Webster had suffered from severe depression for over 10 years before finding a solution using rTMS treatment. 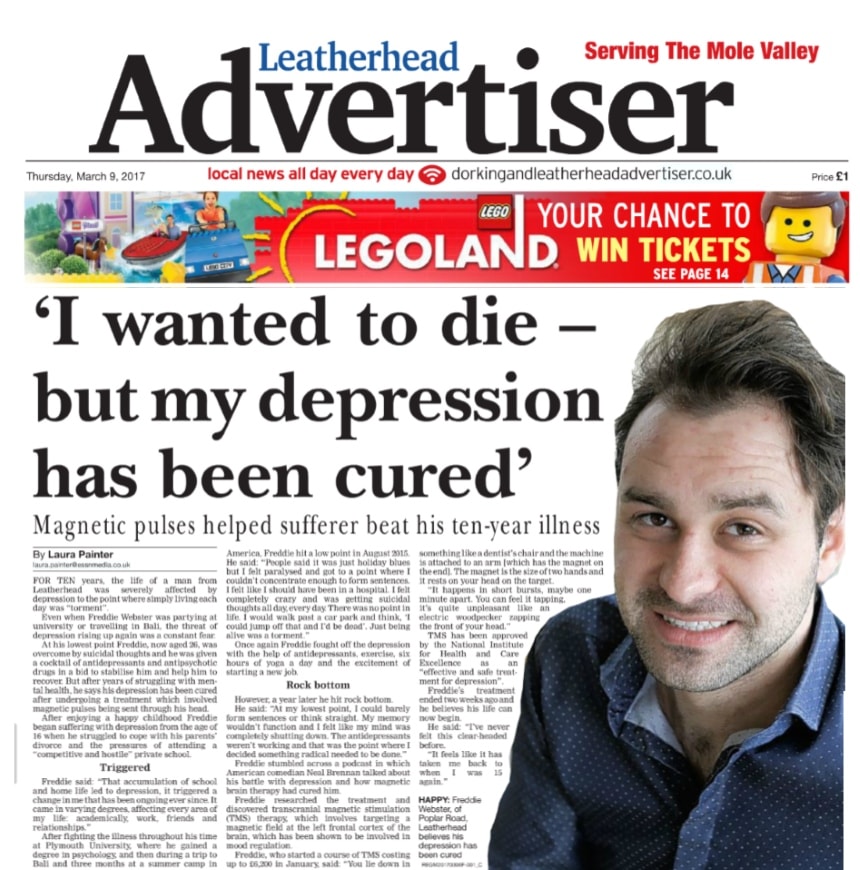 Freddie Webster’s describes his daily life with severe depression as a “torment”.  At his lowest point, he had suicidal thoughts. Treatments included a cocktail of antidepressants and antipsychotic medications together with exercise, but treatment did not give lasting results.

Freddie’s depression began as a teenager when the combination of a ‘competitive and hostile’ school environment together with his parents’ divorce triggered depression.

“That accumulation of school and home life led to depression, it triggered a change in me that has been on going ever since. It came in varying degrees affecting every area of my life, academically, work, friends and relationships.”

Freddie fought depression throughout his time at Plymouth University. He gained a degree in Psychology, and then hit a low point in August 2015 during travel to Bali and a summer camp in America. He describes the experience:

“People said it was just holiday blues but I felt paralysed and got to a point where I couldn’t concentrate enough to form sentences,” he said.

“I felt like I should have been in a hospital, I felt completely crazy and was getting suicidal thoughts all day every day.

“There was no point in life, I would walk past a car park and think I could jump off that and I’d be dead.

“Just being alive was a torment.”

Freddie managed to recover from the depression again with a combination of antidepressants, exercise, 6 hours of yoga a day and the excitement of starting a new job.

However, a year later he had severe depression again. He says:

“At my lowest point, I could barely form sentences or think straight. My memory wouldn’t function and I felt like my mind was completely shutting down.

“The anti-depressants weren’t working and that was the point where I decided something radical needed to be done.”

Freddie found a podcast where American comedian Neil Brennan talked about how TMS transcranial magnetic brain stimulation therapy had cured him after a long battle with depression. 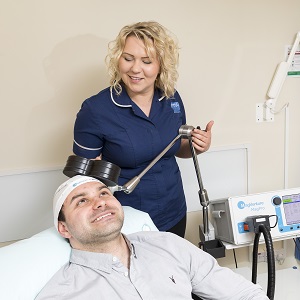 “You lie down in like a dentist chair and the machine is attached to an arm [which has the magnet on the end].”

“The magnet is the size of two hands and it rests on your head on the target. It happens in short bursts, maybe one minute apart.”

“You can feel it tapping, it’s quite unpleasant like an electric woodpecker zapping the front of your head.”

Freddie described the impact of the results on his life, telling the newspapers:

“I’ve never felt this clear headed. It feels like it’s taken me back to when I was 15 again.”

Smart TMS is a specialist provider of TMS treatment in London. Repetitive Transcranial Magnetic Stimulation therapy (rTMS) is a technological breakthrough in the treatment of depression with a variety of further potential treatment applications. It is a non-invasive treatment for depression which uses magnetic impulses to work on areas of the brain affected by depression and has the approval of NICE.

Smart TMS is located within The Smart Clinics in South Kensington/Brompton Cross.