Read the experience of a patient who had treatment for drug addiction. 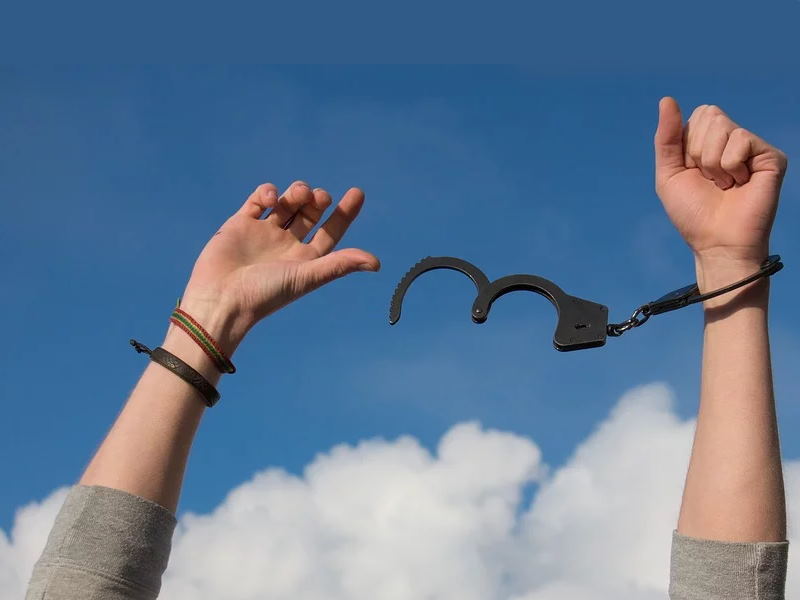 “I attended the rTMS clinic in London, South Kensington, in November 2016”

“When my marriage broke down 5 years ago I began having panic attacks and was on the edge of a breakdown. Over time, I began drinking heavily and snorting cocaine. I then moved on to smoking crack cocaine.”

“My life spiralled out of control and towards the end of the 5 years I was truly addicted to crack cocaine.”

“I had kept my activities as secret from my family somehow. My Mum constantly bailed me out with money. She thought that I was just struggling with bills. I sunk into a clinical depression and had been on two different types of antidepressants. With the alcohol and drugs that I was putting into my system I’m not surprised they didn’t work.”

“I began to miss days at work and this became a regular pattern. I felt like I didn’t care anymore. I had no enthusiasm for anything, for life itself. After being a skilled mechanic for 20 years it was only a matter of time before I lost my job.”

“Ridiculous as it sounds, I was really happy about this. I now had no job and a one and a half thousand pounds a week crack habit that doesn’t include the drinking.”

“I should mention as a matter of great importance, I have 2 beautiful children.”

“Now it hurts me beyond belief to think that the drugs came before anything, that included my children, my family, my own life. I was now so addicted, I would do almost anything to get crack cocaine. I was now spending the bank’s money (overdraft) and getting into serious debt.”

“In October of 2016 I finally came clean to my Mum. I had so desperately not wanted her to know. I thought I could sort myself out and I would never have to hurt my Mum. But I was hurting everyone around me. At an all time low I would spend my days in bed, not showering or cleaning my teeth. What was the point? The only reason for me to get out of bed was to pay a visit to one of my many dealers. My Mum thought that I was getting a high from the crack and was trying to alleviate my depression, but in actual fact, smoking crack is terrible. It made me feel tense, nervous and paranoid. I thought I could hear voices and was constantly looking around, thinking and fearing bad things. So now you’re thinking why did I do it then? The truth is that no matter how bad things got, my brain constantly told me that I wanted more. I was powerless to stop the cravings.”

“My Mum immediately went into overdrive once she had realised what was going on. She spent hours researching cocaine addiction and what happens to the brain and body. She and the rest of my family were sinking with the stress and torment of this situation. I was in the pit of despair and quickly dragging my family into the abyss. The money was a monumental worry that my Mum was trying to keep on to pof as well as the fact that I was leading to nowhere except and early grave. She would cry herself to sleep, imagining herself at my funeral. Her hair was falling out and despite all this and our talks and cuddles and regrets, I still could not stop myself from going out to buy more crack. My Mum always said she would never turn her back on me and with even more determination she went back to the computer and began researching treatments for crack cocaine addiction.”

“This is when she found the Repetitive Transcranial Magnetic Stimulation therapy (rTMS). She read and read with renewed hope about this treatment. She found that although this treatment is big in America and Germany, there was only one place in the UK that offered this treatment for things other than depression. Cocaine addiction was one of the things on the list!”

“My Mum immediately contacted the Smart rTMS clinic in London at Brompton Cross. As I was also drinking heavily at the time, I had to commit to a 2 week abstinence before treatment could begin. I did it. I did it with ease, which shocked everybody. I was ready to change. I hated this life and I had to change. However, the crack consumption escalated. I became paranoid that this might be my last chance. I must get more, I must top up before I go to London. Another few thousand in debt.”

“At the clinic I was greeted with friendly faces, big smiles and professionalism. I had 10 treatments in total. One treatment a day for 5 days and the same again the following week. After the 3rd treatment I had very bad cravings in the evening. If I had been at home I would have definitely gone out for crack. I doubted the treatment was working and my brain was working overtime. What am I going to do? How can I do this to my Mum? Whatever, I wanted a fix. On the 4th day I had cravings again in the evening, but to a lesser extent. I went out for a walk and I stomped around the streets f London. I still would have bought crack if I had the means to get it. After day 5 of the treatment I suddenly found that I had no cravings. I shocked myself when I thought about crack but at the same time realised that I wasn’t bothered about it. I hadn’t felt that for years. I filled in a form at the clinic and under the cocaine craving score I circled the number one. In actual fact, on reflection, I think I should have marked zero. As I still thought about it, I felt I should mark one but in reality thinking and craving are two separate things. The craving was zero! And this has continued to be the case throughout the rest of the treatment.”

“I cannot express how wonderful this feels. No cravings, no depression, nothing but positivity and a renewed zest for life.”

“I am so excited to go home and see my children, to take my little girl out for a birthday surprise, to cuddle and to treasure my son and my daughter. I can’t wait to set up my own business. I can’t stop planning my future for myself and my babies. I truly believe that the rTMS treatment has plucked me from the jaws of hell. I am standing on the precipice and I know it is up to me to keep this feeling now, forever. I want to look forwards to a new life. I want life.”

“Thank you Dr Neal, Gerard, all the nursing staff and the lovely guys on reception. You have treated me with kindness and never judged me.”

“You have saved my life.” 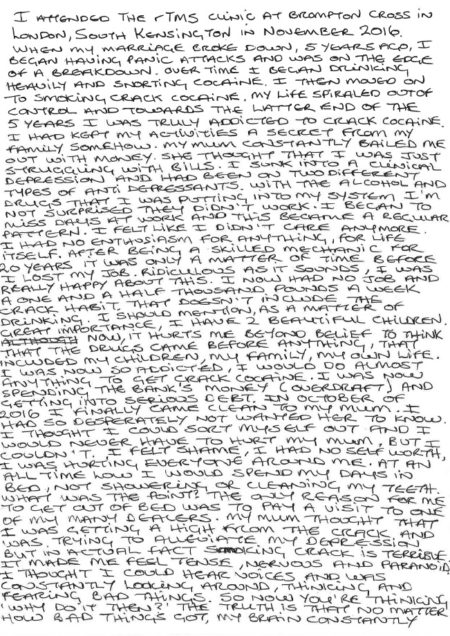 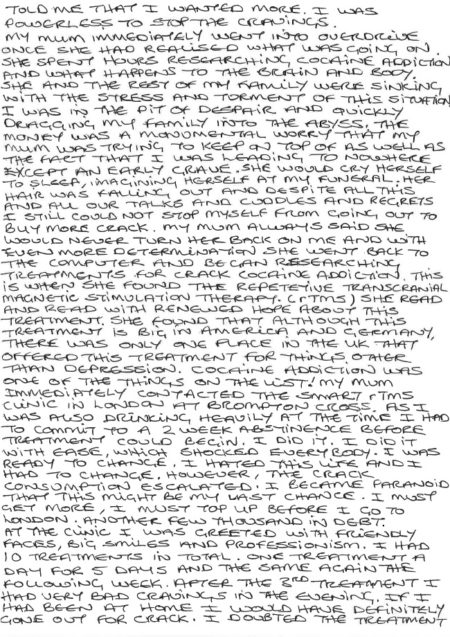 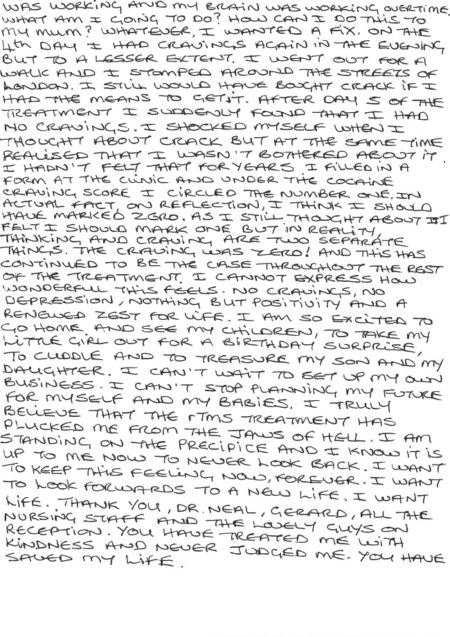 Contact our friendly, knowledgeable team of patient advisors who will talk you through TMS and the response/remission rates we have seen since offering treatment for addiction, in order to help you make the best decision for you.